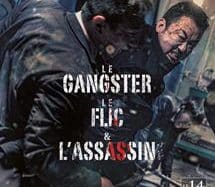 A powerful gang leader whose ferocity is feared in the middle fails to be murdered by a man who runs away without being identified. If he just survived the attack, the gangster knows his reputation is irreparably damaged: he must find the murderer and make him pay. For its part, a police inspector, is convinced that the famous assassin is the elusive serial killer named “K”. The cop and the gangster will then join forces to get their hands on the killer. But if the first dream to see him behind bars, the second has only one idea in mind: to see him die.