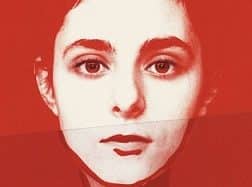 Antigone is a brilliant teenager with a smooth course. By helping her brother to escape from prison, she acts in the name of her own justice, that of love and solidarity.
Now on the margins of the law of men, Antigone becomes the heroine of a whole generation and for the authorities, the symbol of a rebellion to be channeled …

Antigone is first of all a play by Jean Anouilh from the 1940s, which is itself a rewriting of the play of the same name by Sophocles, inspired by the ancient myth of Antigone, the daughter of Oedipus. Director Sophie Deraspe was marked by this tragedy at the age of 20:

“His intelligence, his sincerity, his incorruptibility immediately seduced me. Despite his young age, his lack of experience and the power of his opponent (the king), Antigone stands up. This tragedy was so invigorating for me! Jean Anouilh’s version, I then read Sophocles’ original. I discovered there an Antigone whose quest for justice is all the stronger because it is based on laws which she considers superior to those men. Antigone spoke so much to the young woman that I was, that a strong intuition told me that I would dive back into it one day … ”