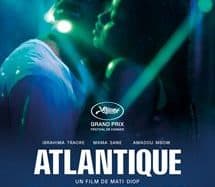 In a popular suburb of Dakar, construction workers, without pay for months, decide to leave the country by the ocean for a better future. Among them is Sulaiman, who leaves behind him whom he loves, Ada, promised to another man. A few days after the boys leave the sea, a fire devastates Ada’s wedding party and mysterious fevers take over the girls from the neighborhood. Issa, a young policeman, begins an investigation, far from suspecting that the drowned spirits have returned. If some come to claim revenge, Suleiman has returned to say goodbye to Ada.