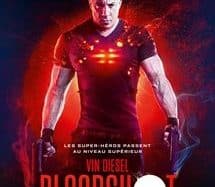 Ray Garrison is a soldier killed on a mission, and brought back to life by RST Corporations, the company that turned him into a super-human. Nanotechnologies are now flowing through his veins, which makes him invincible. He is stronger than ever and able to heal his wounds instantly. But RST Corporation does not control only his body… They also have control over his mind and his memories. Ray can’t tell what’s real from what’s not – but his mission now is to find out.

This second, shorter trailer shows us just how impressive the action scenes are. The fact that Bloodshot is endowed with a tenfold physical force gives rise to fights as spectacular as brutal, halfway between Matrix and Dragon Ball Z! However, despite the hero’s invulnerability, his opponents seem to give him a hard time, as evidenced by the duel with the character played by Sam Heughan.

Bloodshot is directed by Dave Wilson (who makes his first film) and produced by Neal H. Moritz (Fast & Furious). In the role of the genetically modified soldier, Vin Diesel once again plays a formidable killing machine. Guy Pearce, Sam Heughan (hero of the Outlander series), Eiza González (Hobbs and Shaw), Talulah Riley (St Trinian’s) and Toby Kebbell complete the main cast of this feature film adapted from the comics of the same name (published by Valiant Comics) .