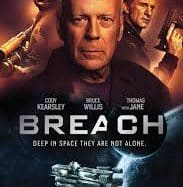 Soon to be a father, a young mechanic working on a space shuttle destined to find a new Earth finds himself outwitting a malicious cosmic force that intends to use the shuttle as a weapon.

A very bad science fiction film which may signify an end of career for Bruce Willis .. It is time for him to change his advisor for these films because his direct videos are getting worse and worse .. We wonder if he accepts his films only for the money he can make without really investing or if he really reads the scripts before validating his contracts. If this continues, he will take the same advisor as Nicolas Cage to choose his films or it may already be the case.