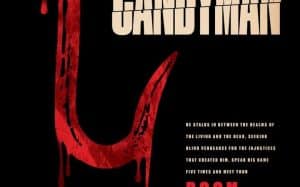 Remake of the horror film Candyman.
Candyman is a scary man who appears when his name is pronounced five times in front of a mirror. Is it an urban legend or does it really exist?

Twenty-seven years after Bernard Rose’s film, Candyman is back in a new film produced by Jordan Peele. Like the 1992 original, this remake takes place in Chicago but shows a transformed and gentrified city where an artist and his partner, director of a gallery, live. The first becomes aware of the legend of Candyman and begins to draw inspiration from his macabre details for his paintings. But he brings back, without knowing it, a bloody past and sees his reason vacillate. We can see in these first images that the hero and Candyman seem to be one and the same person.

Yahya Abdul-Mateen II, seen in the Watchmen series, embodies the hero. He is surrounded by Teyonah Parris (If Beale Street could speak), Nathan Stewart-Jarrett (Misfits) and Colman Domingo (Fear The Walking Dead). Fans will have the pleasure of finding Tony Todd, original interpreter of the boogeyman, in a role still unknown.

As for the staging, it was entrusted to Nia DaCosta, a director unknown to the general public who signed a few episodes of the series Top Boy. Producer of the film, Jordan Peele also signs the screenplay with Win Rosenfeld. The identity of the composer who will have the heavy task of succeeding Philip Glass is still unknown.

Icon of fantastic cinema, Candyman is a bogeyman born under the pen of Clive Barker (to whom we owe another flagship figure of horror cinema: the cenobite Pinhead of Hellraiser) in the short story The Forbidden. Descended from a slave, tortured and burned alive, he returns from the dead to satisfy his revenge and appears to the living when his name is spoken five times in front of a mirror. Bernard Rose’s Candyman had resulted in two suites in 1995 (Candyman 2) and 1999 (Candyman 3: Le Jour des Mort).