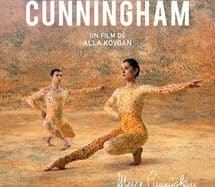 Cunningham traces the artistic development of American choreographer Merce Cunningham, from his early years as a dancer in post-war New York, to his emergence as a visionary creator.
Shot in 3D with the last dancers of the company, the film covers 14 of the main ballets of a career rich in 180 creations, over a period of 70 years.
Cunningham is a powerful tribute, through unpublished archives, to the one who revolutionized dance, as well as to his many collaborators, in particular the plastic artist Robert Rauschenberg and the musician John Cage.

Merce Cunningham is undoubtedly one of the most striking figures in contemporary dance. His career spanned almost seventy years from the creation of his company in New York in 1953 until his death in 2009, during which he staged 180 ballets and participated in 700 performances. She is marked by her collaboration with John Cage, a master of minimalist music, and with other artists from the New York scene: Bob Rauschenberg, Andy Warhol, Jasper Johns … Director Alla Kovgan looks back on the first thirty years of her career from 1942 to 1972 – nothing to clearly understand why she was limited to it. She does this with archival footage, interviews and contemporary reinterpretations of Cunningham’s iconic works: “Antic Meet” (1958) with which Cunningahm debuts under the boos in Paris, dancing alone, a chair attached to the back, “Summerspace” (1958) in the pointillist and solar decor of Rauschenberg (which we see on the movie poster), “Rainforest” (1968) with the incredible pillows filled with helium from Warhol. Breaking with the teachings of Martha Graham, Merce Cunningham advocates a dance without emotion. He refuses to give it meaning. He turns his back on interpretation in the classic sense of the word. He relies on chance to organize it. It lists a range of movements and then rolls the dice to define their order and direction. Music plays an incidental role, the dancers practicing in silence with the Cunningham chronometer as their only point of reference. Such an approach fascinates and freezes at the same time. Cunningham’s dance is perfect. But she has no heart. Alla Kovgan’s documentary is like her. It chronologically tells the story of the creation of the company. It evokes the inseparable couple that formed Merce Cunningham and John Cage until the latter’s death in 1992. But no feeling arose. Neither between the two lovers, nor among the members of the troop where we guess that the master’s coldness caused many frustrations, nor in Cunningham’s dance, beautiful but empty.