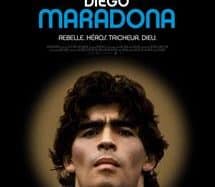 On July 5, 1984, Diego Maradona arrives in Naples for an amount that sets a new world record. For seven years, he ignites the stadiums. The most legendary footballer in the world has found its bearings in the most exciting – but also the most dangerous – city in Europe. On the field, Diego Maradona was a genius. Outside the field, he was considered a god. This charismatic Argentinean loved to fight against adversity and he led SCC Napoli to the top of the table for the first time in his history. It was a waking dream! But the price to pay was high. Diego could do anything he wanted as long as he performed miracles on the ground. However, darker hours have come to succeed these good years … Diego Maradona was made from more than 500 hours of unpublished images from the personal archives of the footballer.