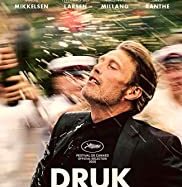 Four friends decide to put into practice the theory of a Norwegian psychologist according to which a man has a deficiency of alcohol in his blood from birth. With scientific rigor, each takes up the challenge, all hoping that their lives will be better! If at first the results are encouraging, the situation quickly gets out of control.

Through Drunk, Thomas Vinterberg wanted to examine how alcohol consumption frees people. For this, the director was inspired by the theory of the Norwegian psychologist Finn Skårderud, according to which the man would have been born with a level of alcohol in the blood which would present a deficit of 0.5g / ml. He explains, however, “If the film is any form of celebration of drunkenness, it is obviously also a lucid portrayal of its devastating effects. Excessive alcohol kills, and destroys lives.”

If dealing with a subject as serious and serious as alcoholism with a little humor may seem shocking, Thomas Vinterberg hopes that the film may give food for thought to an audience whose alcohol consumption is high. He explains: “Drunk is conceived as a tribute to life. As a reconquest of irrational wisdom freed from any anxious logic, which seeks the very desire to live … with sometimes tragic consequences.”