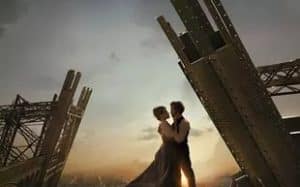 Having just finished his collaboration on the Statue of Liberty, Gustave Eiffel is at the peak of his career. The French government wants him to create something spectacular for the 1889 Universal Exhibition in Paris, but Eiffel is only interested in the metropolitan project. Everything changes when he crosses paths with his youthful love. Their forbidden relationship inspires him to change the Paris skyline forever.

Eiffel is the first biopic dedicated to Gustave Eiffel. The latter is however mentioned in two American films: In pursuit of tomorrow, where he is one of the founders of the famous section of Disney parks Tomorrowland, and Men in Black: International, where he is one of the first Men in Black.
After Molière …
Romain Duris had already played a character who really existed in Molière, where he lent his features to the famous playwright.
Duris in love with Emma Mackey
In the skin of the love of Gustave Eiffel, Adrienne Bourgès, we find the Franco-British actress Emma Mackey, known for her character of the rebel Maeve Wiley in the series Sex Education. She lived in France until the age of 17.