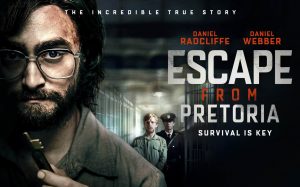 The true story of the incarceration and escape of two anti-Apartheid activists, Tim Jenkin and Stephen Lee, in South Africa in 1978. Incarcerated in the maximum security prison in Pretoria, they decide to send a message clear to the government and escape!

“Escape from Pretoria” is based on the true story of Tim Jenkin, an anti-apartheid activist sentenced to twelve years in prison. Locked up with Stephen Lee, his militant comrade, he thinks of the idea of ​​escaping. If Francis Annan places the story in its context by quickly showing the tensions linked to apartheid, “Escape from Pretoria” remains a prison film and by extension of escape. We are therefore following the crazy project of this man who will turn out to be very clever and intelligent. The whole “setting up the plan” part is interesting although sometimes a little repetitive. As for the execution, it is efficient and very intense. What I would have liked more to see is life in prison since these people are considered traitors. Their stay is rather calm and the director shows no interaction with other prisoners who are not of their clan. This is why, failing to be a great film on this historical fact or this story in particular, “Escape from Pretoria” is above all a good prison film which gains in tension over the minutes and is effective.