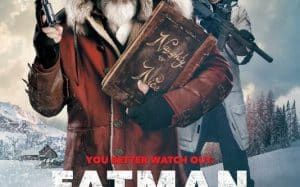 A rowdy, unorthodox Santa Claus struggles with his business decline. At the same time, after receiving a lump of coal in his Christmas sock, twelve-year-old Billy hires a hitman to take out Santa Claus.

The trailer was mind-blowing as the pitch of this film is crossed out: a film about Santa Claus of the most clichés mixed with the hunt for said character by a hired killer. And if the thriller part is perfectly successful, with even a certain western atmosphere during the duel between the two protagonists, the film does not play with the humor and the second degree expected in view of the synopsis. And this lack of humor, valves, genuinely pungent dialogue (apart from the one with the saleswoman from the pet shop), which would have been the counterpart to the “serious” and thriller / action part of the film, makes the work incomplete. We feel that the film would have hit the mark, and have a bigger dimension than a simple direct-to-dvd. There remains the cast with the always hard to kill Mel Gibson, the excellent Walton Goggins in a role that fits him like a glove, and even the charismatic Marianne Jean-Baptiste as Mother Christmas. Not the movie of the year, but a different Christmas movie for such an unusual end of the year.