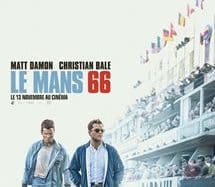 Based on a true story, the film follows a team of eccentric American engineers led by the visionary Carroll Shelby and his British driver Ken Miles, who are sent by Henry Ford II to build from scratch a new automobile which is to dethrone the Ferrari at the 1966 Le Mans competition.