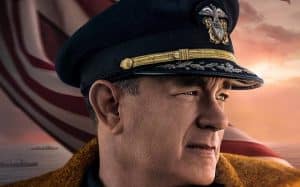 “The only thing more dangerous than the first line is the battle that leads to it.” In USS Greyhound, a new war film inspired by real events, Tom Hanks slips under the cap of Commander Ernest Krause, captain of the USS Keeling, a warship that led a whole convoy to the front line, pursued by Nazi submarines.

The USS Greyhound trailer takes us deep into the “Battle of the Atlantic”. A breathtaking and oppressive immersion, served by a dramatic soundtrack. This film directed by Aaron Schneider and scripted by Tom Hanks himself will not leave us a second of respite if we are to believe these few images. Adapted from a short story written by C. S. Forester, USS Greyhound will be told from the point of view of Krause, a man fighting against his inner demons when he is first sent to the front. Twenty-two years later Saving Private Ryan, Tom Hanks embarks on a new perilous mission … and he will have by his side Manuel Garcia-Rulfo (6 Underground), Karl Glusman (Love) or even Lee Norris (The Scott Brothers ).