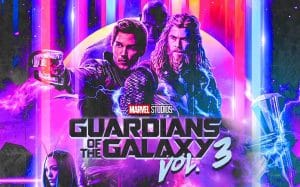 Guardians Of The Galaxy Vol. 3

Released in April 2017, Guardians of the Galaxy 2 ends with several post-credits scenes, a tradition at Marvel. If these sequences are sometimes quite anecdotal, even useless, those of the Guardians have the merit of questioning us, in particular on the characters that we will see in the continuation of the MCU. While waiting for the 3rd installment of the adventures of Star-Lord, Groot and company, let’s take a look at the last sequences of the second part, which promise good surprises for the future.
KRAGLIN HAS MORE THAN A STRING TO ITS BOW

A first post-credits sequence, seemingly innocuous, features the character of Kraglin Obfonteri (Sean Gunn). Yondu’s first lieutenant, who died in this 2nd installment, seems to inherit the powers of the arrow from his leader. He starts playing … but he does not control her and sends it directly into the shoulder of poor Drax (Dave Bautista), who screams in pain. While the scene, comedic at first, may seem unwarranted, it may have been introduced first to tease an important role for Kraglin and the Ravagers in Guardians of the Galaxy 3.