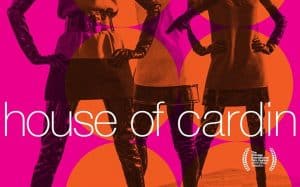 Millions of people know the logo and iconic signature of PIERRE CARDIN.
But few people know the man behind the creator. What is the story of this legendary couturier? PIERRE CARDIN has revolutionized fashion in Haute Couture, ready-to-wear and design all over the world.
With the archives of Maison CARDIN and the testimonies of icons – JEAN-PAUL GAUTIER, SHARON STONE, NAOMI CAMPBELL, PHILIPPE STARK – an immersion in the spirit of a genius and in the history of the “Last Emperor”

Note of intent from P. David Ebersole and Todd Hughes
“We are Cardinophiles. When we started decorating our house five years earlier, we made a remarkable discovery: Pierre Cardin, the man we only knew as the creator of cologne that we wore when we were teenagers, were also the creator of wonderful modern furniture. While we were just starting to receive new furniture from Pierre Cardin, we became passionate, and discovered a new universe, a style of life, and not just decorative elements.

Fate was with us and in the summer of 2017 we met the legend herself. Monsieur Cardin had never wanted a biography about him and he had turned down all offers for documentaries. Until we looked each other straight in the eye, and as he had done with Jean-Paul Gaultier and Phillippe Starck, he had said yes to us, adding: “When do you want to start? This film was the adventure of a lifetime. It’s not easy to fit 97 years of a life into a 97 minute film. We traveled all over the world following him step by step, and found that he was the first to want to bring different cultures and different people together through fashion.

It was a dream cast, dotted with many diverse and varied personalities. We noticed that Naomi Campbell was one of the few actresses to wear vintage Cardin outfits on the red carpet. We contacted her and she immediately agreed.

Sharon Stone was a very good friend of Jeanne Moreau, they appeared together on the cover of Paris Match. We thought she could tell us about the relationship between Moreau / Cardin but we discovered that Pierre Cardin had discovered her in the middle of the crowd when she was still a young model, telling her that she had something special. She eagerly agreed to wear the vintage outfit that was flown from her museum to Paris during the interview.

Jean-Paul Gaultier was perhaps the most difficult personality to book, but only because of his busy schedule and his desire not only to slip us between 2 dates but rather to give us a full interview of 2 hours. It was extraordinary to discover that Pierre Cardin had influenced so many famous people, and that they had such great esteem for him.

When our research revealed that musicians Jean-Michel Jarre, Alice Cooper and Dionne Warwick all performed at the Espace Cardin on its 52nd birthday, our email requests were answered in record time. with the enthusiasm of participating in the documentary. They all delivered unique anecdotes, forcing admiration and respect for Mr. Cardin.

We were ecstatic at the idea of ​​being able to preview the film in the presence of Mr. Cardin in the city where he was born. Most importantly, he sent us a very nice message the first time he saw the movie and ended by adding “It’s all true! “. For us it was better than winning an Oscar. It’s impossible to reference all of his work and successes, but we had a common thread that guided us throughout: “Who is Pierre Cardin? “”