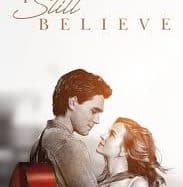 Jeremy and Melissa spin the perfect love when they learn that she has an incurable disease. Despite the incomprehension of their loved ones, they decide to get married and fight together to face this terrible ordeal… Taken from the true story of the American singer Jeremy Camp and his childhood love Melissa.

Alert to Riverdale fans: K.J. Apa will soon be playing rock stars on the big screen. Expected in theaters in the United States in March 2020, I Still Believe, directed by Jon and Andrew Erwin, will see the interpreter of Archie Andrews embody the Christian rock singer Jeremy Camp, who has sold more than 5 million albums in the world.

The feature, whose first trailer is visible in the player above, will focus on Camp’s ascent to success, while at the same time his fiancée, Melissa, played by Britt Robertson (For The People , Girlboss), is fighting cancer. A test that will push Jeremy to question his own faith and will strengthen the love of the couple, despite the irreparable outcome looming. Gary Sinise (The Experts: Manhattan) and singer Shania Twain complete, in the role of Jeremy’s parents, the distribution of this romance which seems to be in line with the teen drama of the 2000s The Time of an Autumn, with Mandy Moore and Shane West.

After The Last Summer, released in the spring on Netflix, K.J. Apa thus finds a new leading role alongside Riverdale, who will return in October for a fourth season. He finds Britt Robertson, with whom he had already shared the poster of My Lives of Dogs in 2017. The opportunity for him to show another facet, trying his hand at a more dramatic register, and to push once more the song.