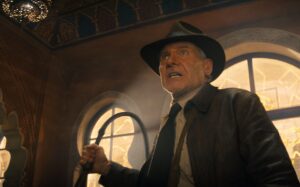 Indiana Jones and the Dial of Destiny

Expected for June 28, 2023 at the cinema, Indiana Jones 5 is gradually beginning to reveal its mysteries! This weekend, Empire offered its readers a preview of the upcoming January issue dedicated to the famous archaeologist.
On the menu, the first official photos of Harrison Ford, Mads Mikkelsen, Boyd Holbrook and Phoebe Waller-Bridge. We also learned that the main plot will take place in 1969 and will be centered on the conquest of space.
“I wanted to immerse the audience in the atmosphere of old adventure films like Steven Spielberg and George Lucas did for the first games. I want to give the audience an adrenaline rush from the start of the film,” said James Mangold.
Empire says the scene will take us to 1944 in a castle crawling with Nazis with an Indiana Jones rejuvenated with the help of digital technology.
“We then switch to 1969”, then underlines the director. The latter justifies the use of digital rejuvenation by the fact that the viewer must have a concrete vision of the past 25 years.
Thus, Indy 5 will begin with a spectacular action sequence, as is customary in all episodes of the saga. Will the rendering be up to par? Answers on June 28 in theaters.
As for the main interested party, Harrison Ford, he was amazed by this rejuvenation technique. “It’s the first time that I really believe in it,” he says. “It’s a bit scary. I don’t think I want to know how it works, but it works. On the other hand, it doesn’t make me want to be young again. I’m happy to be my age”, he jokes.