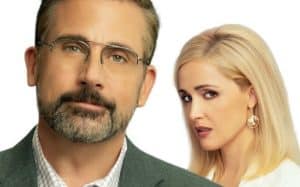 Gary Zimmer (Steve Carrell) is a Democratic political consultant struggling to recover from Donald Trump’s surprise victory. Discovering on YouTube the video of a retired colonel (Chris Cooper) who stood in front of the city council of his small town of Wisconsin, solidly Republican, to defend the undocumented, he decided to sponsor his candidacy for the next municipal elections. Even if the reception of his guests is hospitable, the change of scenery is harsh for Gary who has to give up his taste for luxury. The campaign soon took on a national dimension and attracted another consultant, the formidable Faith Brewster (Rose Byrne) who worked for the Republicans. There are two parts to “Irresistible”. The first lasts an hour and a half. She will delight bobos like me who would have voted with both hands, if they had been able, for Hillary Clinton in 2016 and do not understand the support enjoyed by Donal Trump in deep America, perhaps for want of it. lived long enough and master the codes. This first part, a little predictable, is organized around a double rapprochement. On the one hand, the arrogant consultant, disembarked from the capital, abandons one after the other his habits and his prejudices towards deep America. On the other hand, the small town of Deerlake will gradually shift into the Democratic camp to offer our hero a victorious happy ending. The last ten minutes contradict these forecasts. This is the second part of the film about which I have already said too much by revealing its existence. The meaning of “Irresistible” is completely overturned. It is no longer an anti-Trump elegy but on the contrary a populist fable, criticizing politicians of all stripes, the elitism of professionals in political marketing with so-called scientific techniques but with mediocre results, the money king which makes and undoes the elections, the frenzy of the electoral campaigns as quick to poll the voters as to ignore them once the ballot is over. The self-righteous bobo feels a bit cheated; but a good loser, he will not withdraw his support for this clever and well-played film which will have avoided the pitfall of a predictable outcome, even if it means preferring a conclusion less in accordance with his political preferences.