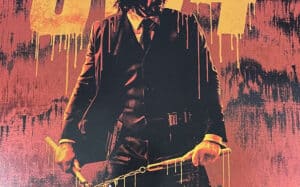 From New York to Osaka, via Paris and Berlin, John Wick leads a fight against the Big Table, the terrible criminal organization that has put a price on his head, by facing his most dangerous killers…
I would say that it is important not to try something crazy by adding another layer to their criminal universe as in the 3 where it went even further until it became ridiculous (the delirium of the supreme leader – incredible miscast by the way – stashed at the bottom of a desert in a tent and that you find by following the stars blablabla we are not supposed to be delirious either like a heroic fantasy quest either) and this film must bring something to the general plot in a significant way (because between the beginning of 3 and its end, we haven’t advanced much, limit we can go from 2 to 4 without missing much, which shows the emptiness of the scenario).
And it’s not revealing details of Wick’s Russian past that will have convinced me (personally, I’m against wanting too much to reveal the past of characters whose aura is also based on a mysterious side, Harris has it made with his Hannibal Lecter and it didn’t have much flavor).