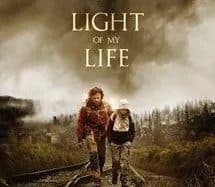 Light of my Life

In the near future where the female population has been eradicated, a father tries to protect Rag, his only daughter, miraculously spared. In this brutal world dominated by primary instincts, survival requires strict discipline, made of permanent flight and subterfuge. But he knows it, his biggest challenge lies elsewhere: when everything is collapsing, how to maintain the illusion of a carefree daily life and preserve the bond of bond with his daughter?