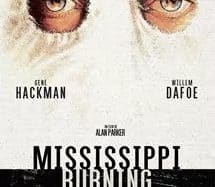 1964. Three activists on a civil rights committee mysteriously disappear in the state of Mississippi. Two FBI agents, Ward and Anderson, with opposite but complementary methods are responsible for the investigation. Very quickly their investigations disturbed and violence against a background of racism broke out in this city where the Ku Klux Klan stirs up hatred and violence…
Excellent treatment of ordinary racism erected in an institution, as revolting as it is horrifying! Despite a staging slightly fallen into disuse, the film by Alan Parker is a precious work as it perfectly illustrates this blind and arbitrary violence, consisting in denying others by virtue of absurd criteria such as skin color, the most basic rights of equity and justice. An overwhelming film with an effective cast (Hackman, Dafoe) including the future Merle of Walking dead (Rooker) and Jigsaw from the Saw series (Tobin bells). The ancestor of American History X in short.