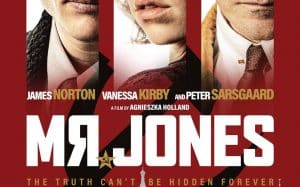 For a novice journalist, Gareth Jones has no shortage of cheek. After landing an interview with Hitler, who has just come to power, he landed in Moscow in 1933 to interview Stalin on the famous Soviet miracle. When he arrives, he becomes disillusioned: anesthetized by propaganda, his Western contacts are hidden, he finds himself watched day and night, and his main intermediary disappears. A source then convinced him to be interested in Ukraine. Managing to flee, he jumps on a train, on the way to an unimaginable truth …

The Polish director Agnieszka Holland has already made several films on dark chapters of contemporary history in Europe such as Sous la ville. She also directed episodes from the House of Cards series. “I had never been asked to make a film about the Holodomor. It’s been a while since I thought about it and said that there are still a lot of crimes committed by the communist regime that we don’t talk about. The world is not aware of these crimes, while the Holocaust is a fact known in the history of mankind. Even the Russians and the inhabitants of the former Soviet republics do not speak about the crimes committed in the name of communism , when Stalin killed more than 20 million of its own citizens! In a survey carried out last year, it seems to me, people elected Stalin as the greatest Russian leader in history. how monstrous it is, and the influence it must have on politics in Russia, you have to imagine what would happen if the Germans chose Hitler today! ”

Holodomor is a new term coined in Ukraine to define extermination by hunger and its intentionality. In the space of two years, from the summer of 1931 to the summer of 1933, almost 7 million Soviets, the vast majority of them peasants, died of hunger during the last great European famine that occurred in peacetime: 4 million in Ukraine, 1.5 million in Kazakhstan and as many in Russia. Unlike the other famines, those of 1931-1933 were not preceded by any meteorological cataclysm. They were the direct consequence of a policy of extreme violence: the forced collectivization of the countryside by the Stalinist regime with the double aim of extracting from the peasantry a heavy tribe essential to the accelerated industrialization of the country, and to impose a political control over the countryside, which until then had remained outside the regime’s “value system”.