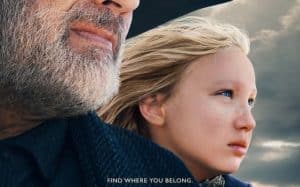 News of The World

Five years after the end of the Civil War, Captain Jefferson Kyle Kidd, a veteran of three wars, crisscrosses the country from city to city as a public reporter and keeps people informed, through his readings, of the adventures of the greats of this world, quarrels of the gratin, as well as the most terrible catastrophes or adventures at the end of the world. As he crosses the plains of Texas, he crosses paths with Johanna, a 10-year-old captured 6 years earlier by the Kiowa tribe and raised as one of their own. Survived and returned against her will to her aunt and uncle by the authorities, Johanna is hostile to this world that she will have to join and do not know. Kidd agrees to bring her back to the home to which the law has assigned her. For hundreds of kilometers, as they traverse hostile nature, they will have to face the many pitfalls, both human and wild, that line the road to what each of them can finally call home.