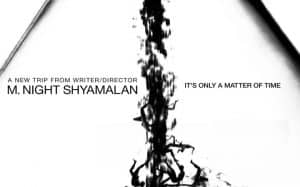 On vacation in the tropics, a family stops for a few hours on an isolated atoll where they discover with dismay that their aging is drastically accelerated and that their entire lives will be reduced to this last day.

I would have said Phenomena and After Earth ^^ (The Last Airbender is a BIG miss in terms of adaptation), but as entertainment, he watches himself. With music that uplifts it all. But yes, big disappointment. He should have done something more ambitious (3h), with a better cast and a better script. Instead of condensing the 2nd episode of the anime.

Split, with hindsight (and even at the time). I don’t find it great either. Really good yes, but too classic in its approach to Thriller (and a roller coaster rhythm, especially when I saw it again). Whoever wears it all is clearly McAvoy.

But the ending was crazy (which may have affected the feel of the film).