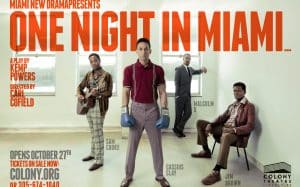 One Night In Miami

This is the first feature film as director of Regina King, an actress seen in particular in Jerry Maguire, The Leftovers and Watchmen. She won the Oscar for Best Supporting Actress for If Beale Street Could Talk in 2019. With One Night in Miami, she is the first African-American director to be selected at the Venice Film Festival.
Inspired by a play
One Night in Miami is adapted from the play of the same name by Kemp Powers, written in 2013. It imagines what happened on the night following Mohamed Ali’s victory in 1964, when the boxer celebrated his title with three friends, major figures of African-American culture. If this meeting did take place, we do not know what actually happened.