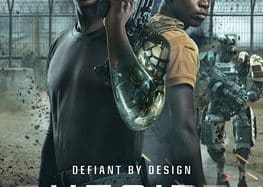 In the future, a drone pilot is deployed to a murderous militarized zone where he will work for an android officer tasked with preventing a nuclear attack.
In this action film more than science fiction, we see four kinds of fighters. First the flesh soldiers on the ground, then heavily armed android robots, cyborgs with special tasks, and finally those who wage war behind screens to operate armed drones. The latter are perceived by the former as well-hidden cold-blooded killers. Harp, a drone pilot goes to disciplinary committee for taking an attack initiative that cost the lives of two marines while saving 38. Sanctioned, he is sent to the field to fight. He finds himself under the orders of a captain, a sort of Rambo, who propels him into a hostile zone, for humanitarian purposes. So as not to give away any further development of the plot, I would just say that there is a lot of action and twists. As for the actors, it’s fun to find the spin doctor Kasper from the Borgen series in the role of Koval and Doug, trusted man of the US president of House of Cards in the role of Colonel Eckhart. Suffice to say that with Anthony Mackenzie in the role of Leo, there are actors who have proven themselves. This blockbuster is typically American and can be irritating for the clichés it conveys. That said, he still transmits a humanist message in his own way.