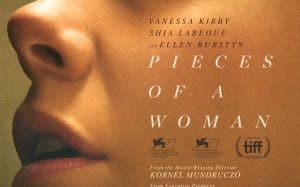 Pieces of a Woman

Living in Boston, Martha and Sean Carson are preparing to become parents. But the couple’s life is turned upside down when the young woman gives birth at home and loses her baby, despite the assistance of a midwife, soon to be prosecuted for negligence. Martha must then learn to grieve, while undergoing an intrusive mother and an increasingly irritable husband. But he must also attend the trial of the midwife, whose reputation is now destroyed. Pieces of a Woman is an intimate and heartbreaking chronicle of the life of a couple, and the heartbreaking portrait of a woman who must learn to mourn.

It’s hard to talk about Pieces of a Woman without mentioning its inaugural shot. No matter how I tried to approach the work differently, I didn’t have to do anything. On the one hand because there is a note of perfect intention coupled with a magnificent technical prowess. And secondly because these twenty minutes of emotional lift will literally (and metaphorically) undermine the film. Not that the subject (very hard, be warned) loses all interest over the next 80 minutes, very far from it. It is about a host of mixed feelings, tangled or quite simply stuck together, whose interactions between them are as many possible exits as they are closed doors. Director Kornél Mundruczó orchestrates their difficult cohabitations in a ballet of lateral movements, long shots where the silhouette of Vanessa Kirby (formidable) takes on the appearance of a specter wandering in spaces where he seems trapped (the family home, the little nest of the couple). The camera embraces his point of view and his perspectives, or rather his absence of perspectives (the front, the future). Several processes all more significant than the others (the bridge, the germs, the meteorology) adorn Pieces of a Woman, to translate the state of the young couple as the “chapters” of his life unfold. The problem remains that the symbolism is sometimes starched and that much of what happens in this hour twenty seems anecdotal compared to this introduction coup de force. On a similar subject, Rodrigo Soroyogen’s recent Madre (also visually impressive) offered several plot elements conducive to making it bounce back. What is missing here, since the film refuses to be anything other than an obvious requiem before the rebirth. In the meantime, and it’s a bit of a shame, the actors are advancing towards a series of inevitable events (really?) Which they embody very well but whose languor ends up numbing the vigor. He will have to wait for the end, this time for the acceptance of death and this return to the pulse, to life, to regain his heartbreaking force.