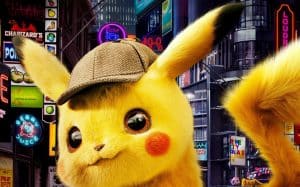 After the mysterious disappearance of Harry Goodman, a private investigator, his son Tim will try to find out what happened. Detective Pikachu, Harry’s former partner, is involved in the investigation: an adorable super-detective with hilarious shrewdness, which leaves many perplexed, including himself. Noting that they are particularly well matched, Tim and Pikachu join forces in a thrilling adventure to solve this unfathomable mystery. In search of clues in the neon-populated streets of the city of Ryme – a modern and sprawling metropolis where humans and Pokémon live side by side in a very realistic live-action world – they meet several Pokémon characters and then discover a shocking plot that could well destroy this peaceful coexistence and threaten the whole of their universe.