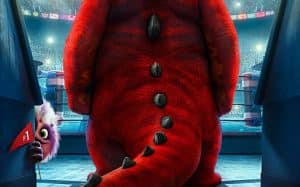 In a world where monster fighting has become an international sport, ultra-popular with its planetary mega-stars, Steve, a lazy monster, as engaging as he is clumsy, is not a champion.
Yet it was he that young Wendie chose to train: the daughter of a legendary trainer, she intends to follow in his footsteps! The challenge is daunting… will their unlimited friendship allow them to meet it?

Steve – Beast of combat (Rumble in VO), is revealed through a very first trailer. This animated feature is produced by the animation branch of Paramount in association with WWE Studios – a subsidiary of the professional wrestling federation World Wrestling Entertainment specializing in film production.
Directed by Hamish Grieve, of which it is the first production, the film takes place in a world where the fight of monsters has become an international and ultra-popular sport. Monster athletes are planetary stars. Steve, a lazy monster, as engaging as he is clumsy, is by no means a champion. Yet Wendie – the daughter of a legendary coach – chooses to make him a champion. A kind of mixture between Monstres & Cie and The Wrestler.