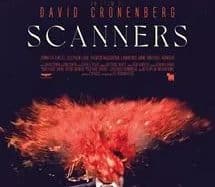 Cameron Vale is a telepath who lives on the margins of society. Spotted by ConSec, a secret society that conducts research on these types of individuals called “scanners”, he learns from Doctor Ruth to harness his power. Cameron is then responsible for locating Daryl Revok, a scanner which organizes on an industrial scale trafficking in Ephemerol: a dangerous chemical intended for pregnant women …

“Scanners” is sort of everything that defines Cronenberg, his passion for the medical field, paranormal pathologies and horror, it tells the story of Cameron, endowed with a medium power called “Scanner” who is engaged by a company to track down the other scanners and bring them to the most powerful of them, Revok. Cronenberg remains in line with his previous film “Chromosome 3”, and his scientific, organic and bizarre themes, with his touch of gore rather explicit, we can notice a real leg in terms of staging and universe, l the atmosphere is oppressive and strident. The scenario is first of all fascinating but falls a little into redundancy in spite of some very controlled scenes in term of narration and intensity, the medium of the film seems a little like a soft belly, but the intrigue around the drug Ephemerol goes settle and offer us an excellent last part with an absolutely exceptional final, the duel of telepaths is cult. Besides, the special effects are really to be welcomed, as much for the finale as for this scene towards the beginning of the film where the head explodes under the shock of the telekinesic waves, really very successful. The cast is very good, especially the charismatic Michael Ironside, used to Paul Verhoeven, we can also appreciate the performance of the excellent Patrick McGoohan, even if his role is very minimal. The soundtrack is also of quality thanks to the composer Howard Shore, who will sign all of Cronenberg’s feature films from “Chromosome 3”, it remains only his second score, the start of an extremely prestigious career ( “The Silence of the Lambs”, “Ed Wood”, “Seven”, the “Lord of the Rings” trilogy …). “Scanners” remains a turning point in the filmography of David Cronenberg and deserves to be seen, and even if it is not perfect, it demonstrates all the talent of the director, who will follow two years later with (for me) his film the most successful, “Videodrome”.