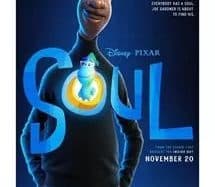 The moment Joe thinks that his dream is now at hand, an unfortunate step sends him to a fantastic place where he is forced to think again about the meaning of having a soul. This is where he befriends 22, a soul who does not think life on Earth is as good as it is made to believe …

Soul takes place in New York. Directors Pete Docter and Kemp Powers have captured everything they love about this city where anything is possible. Kemp Powers says, “I was born and raised in New York. This is the first time Pixar has visited my hometown and I was truly impressed with the amount of energy it took to pay him such tribute. When the character is in Queens, you really feel like you are there. Same thing when he goes to Manhattan. It’s pretty incredible. ”

The idea was born in the head of director Pete Docter 23 years ago, when he became a father. The director explains: “It all started with my son, who is now 23 years old. From birth, I felt that he already had a personality. Where did she come from? I thought that a personality developed according to the interaction we had with the world around us. However, I notice that from our birth, there is something unique and specific that is already inscribed in us “.