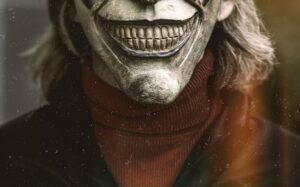 Finney Shaw, a shy but intelligent 13-year-old teenager, is kidnapped by a sadistic killer who locks him in a soundproof basement where shouting is not of much use. When a phone hanging on the wall, yet out of order, starts ringing, Finney will discover that he is in contact with the voices of the previous victims of his captor. They are as dead as they are determined that their sad fate will not become that of Finney.

Ten years after making an impression with the sinister atmosphere of the very aptly named “Sinister”, the Scott Derrickson + Ethan Hawke + children formula reappears in a Blumhouse production. As a symbol of what quickly became in 2012 a reference title of the beginnings of its catalog, the firm specializing in horror is also adorning itself with changes around its well-known emblem on the occasion of the opening of ” Black Phone”, no doubt aware of the success and quality that this new meeting can augur well for further establishing its reputation in this area. And it obviously does not miss, this time with the basis of a short story by Joe Hill as a playground, “Black Phone” immediately stands out as a potential hit!

1978, in a small town in Colorado apparently devoid of a school bus service that could avoid many problems, a child kidnapper rages under the nose and beard of the authorities. Soon, he sets his sights on poor Finney. Locked in a soundproof basement by his executioner, the young boy begins to receive calls from an old black telephone whose wires are however torn…