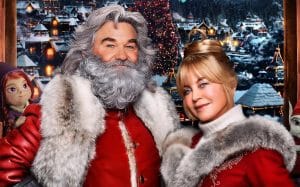 This sequel to the “Christmas Chronicles”, this time directed by Chris Columbus, which I admit, rather anxious to see, left me completely unmoved. Indeed, since I was very pleasantly surprised by the first one, I expected a film in the same vein but it’s just pretty bad. Especially since this one is made by Columbus, I had even more expectations! In short, Teddy and Kate are celebrating Christmas this time in the Bahamas but Kate doesn’t like it, she prefers to celebrate Christmas around a hot chocolate and a fireplace. Until then all is well then, until we are invented an old story with an elf in the middle of a teenage crisis who becomes human (boo the greedy and selfish evil humans) who will attract Kate and her brother-in-law to the Santa Claus village. Once again, then, we will have to save Christmas but if the first one was rather original, here everything becomes very cutesy. The first one was also a little silly at times (it’s Christmas at the same time, the family spirit, all that, all that) but there we are so in the stupidity that it becomes really very boring. Suddenly, we follow the adventures of Kate and Santa Claus with a certain boredom because the story is not original and oh so predictable. The “bad guy” has absolutely no charisma, he is even very difficult to bear (his hateful air in particular plays a role in it) and then Jack and Mother Christmas are useless, except to fill the gaps narrative, like most of the secondary characters. Oh yes, Mother Christmas knows how to cook, tell stories and dreams of having kids like any perfect good housewife. It’s very soft, not much is happening, we have a lot of unnecessary scenes, especially the one in the airport which has absolutely nothing to do with the plot and then the end moral which is, like the rest, unbearable and predictable; today we play a lot on acceptance in blended families in particular (add to that the laughable scene in which Jack understands that the snowman cake is useless and that he was able to find the courage himself, blablabla ). We also have the inconsistencies which, even if we are less careful about it with regard to the Christmas films, still make a mark here, in particular when the sled appears above a beach and disappears in a green portal. fluo, apparently it bothers no one. As far as the actors are concerned, we find Kurt Russell and Darby Camp, Judah Lewis is no longer useful (too old I imagine, we really wanted two kids to do even more silly and “Kwismas magic”) and as well as Goldie Hawn, Jazhir Bruno etc. and then Tyrese Gibson, we know he’s there but we don’t know why, if not to bring a little social diversity in a very white family (we are not going to lie to each other either, it fucks her well, especially with the progressive discourse of Netflix). “The Christmas Chronicles 2” is therefore a bitter failure and passes the first for a masterpiece.