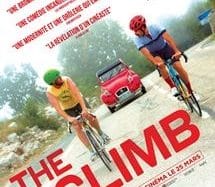 Kyle and Mike are two best friends with very different temperaments, whose friendship has always stood the test of life. Until the day Mike sleeps with Kyle’s fiancée …
While the friendship between them should have been irreparably broken, a dramatic event will reunite them again.

After touring the festivals with his short film The Climb, the American director Michael Angelo Covino offers himself a first nomination with his adaptation of the feature film. The film is indeed presented at the Directors’ Fortnight at the Cannes Film Festival 2019.