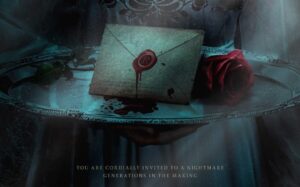 After her mother’s death, Evie finds herself without a family. She decides to do a DNA test and discovers a distant cousin of whom she did not suspect the existence. After getting in touch with him, he invites her to a lavish wedding in the English countryside so that she can meet her new family. First under the spell of the handsome aristocrat who hosts the festivities, she quickly finds herself plunged into a hellish struggle for her survival by discovering the dark secrets of her family’s history and the troubling intentions of her hosts under cover of a strange generosity.