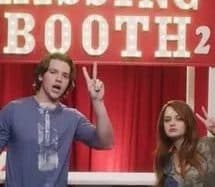 The romantic misunderstandings of Noah, Elle, and Lee, the young heroes of The Kissing Booth, are far from over. Netflix has indeed formalized yesterday the order of a sequel which, according to Variety, will soon be filming for a likely release in 2020 on the streaming platform. Joey King (The role of my life, Slender Man), Jacob Elordi, and Joel Courtney (Super 8) will obviously be back in the main roles while Vince Marcello, the director of the first part, will once again be in command on the base of a script he co-wrote with Jay Arnold.

Available since May 11, 2018, The Kissing Booth, adapted from the homonymous novel by Beth Reekles, follows the adventures of young Elle, who has never kissed a boy before, and decides with her best friend Lee to hold a kiss stand during the high school spring funfair. But she does not suspect that she will end up exchanging a kiss with Noah Flynn, the bad boy with whom she is secretly in love. Only downside: Noah is Lee’s older brother and, according to an agreement made by the two friends, She is not allowed to flirt with him. Divided between her feelings for Noah and her friendship with Lee, She will then have to make a choice: follow the rules of the pact she made with her best friend or follow her heart.

No information has yet filtered on the plot of The Kissing Booth 2, but if we are to believe the success of the first opus, there is no doubt that this sequel should again create the event and find its audience. True phenomenon among teens, The Kissing Booth has notably succeeded in winning the record for the feature film re-viewed as many times by Netflix subscribers in 2018 (one in three subscribers having watched the film saw more than once), in front of To all the boys I loved, another teen movie phenomenon from last year, a sequel of which is also in development on the Netflix side.