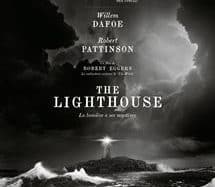 The film takes place in a distant and mysterious island of New England in the late nineteenth century, and staged a “hypnotic and hallucinatory story” of two lighthouse keepers.

I had the honor of seeing the film at the Deauville festival, it was a crazy experience. To give my opinion without spoiler:
-The staging is excellent. The film is of a crazy visual beauty, the black and white is very beautiful as the reconstruction of the island. The plans are exceptional (some shots, including close-ups, remind us of Bergman). The atmosphere is creepy to us only with black and white but also music and sound design that are perfect. We feel the isolation that live these two guards and the worrying character of the island.
-The acting games of Robert Pattinson and Willem Dafoe are simply exceptional. They are 100% invested in their roles and they carry the entire film on their shoulders. We can feel the madness taking hold of them as the story advances.
-Finally, for the story itself: the scenario, based on a simple postulate of two guards of an isolated lighthouse succumbing to madness (which obviously reminds many Shining), develops many interesting themes as the discovery of the other , faith, marine legends, paranoia and others .. The dialogues are of a formidable efficiency, sometimes funny, sometimes bitter. We feel the passion that Robert Eggers with the old dialect. The film is also dotted with a lot of funny scenes, especially between the two characters. The film is not scary, strictly speaking, it is more disturbing because of the madness in which falls both men and the different hallucinations (?) … In any case The Lighthouse is a great experience, not to put between all hands (especially those who come hoping for bursts) and who enters my top 3 of the year 2019!