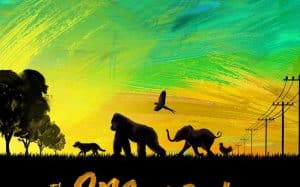 The One and Only Ivan

Ivan is a 200 kg gorilla who lives with his friends, the elephant Stella and the dog Bob, in a mall in a US suburb. He leads a peaceful life and has only vague memories of the jungle where he was captured. The arrival of a very young elephant, little Ruby, who has just been torn from her family and the wild life, will move him deeply and question his beliefs. Her sadness causes Ivan to question his own existence, his origins and his destiny.

You all know it, I love film adaptations and then I love Disney so the mix of the two, hard to miss! Like every Sunday morning, we have a cinema with my son or a home theater movie! So we picked this one last Sunday and I have to say we both liked it and we both cried as much as the other! The story is taken from a novel, itself, taken from a true story. So obviously here to give another dimension to the animal characters, Disney gave them words and it is rather a good choice. The animation of these is really perfect. We end up with an absolutely perfect Ivan. We feel his feelings as well by his gaze as his dialogues. The story is strong, a great desire for freedom after being locked in a cage for 27 years! 27 years is a long time without seeing a bit of nature and having to do shows every day. This is how he begins to dream of freedom and even more so when Rubis, a little elephant arrives. It’s not that he is mistreated but we have to admit that 27 years is a long time and even the locals get tired of him and the spectacle since there are fewer and fewer people. The show resumes when Ivan discovers a new passion and even a gift for knowing how to draw. This is what will save him and allow him to obtain a better living environment! A truly touching story. In short, The One and Only Ivan is a touching film! It’s a very nice movie adapted to the Disney sauce because the animals talk but I find it gives a lot of feelings to the characters like that. A very beautiful story told thanks to a very successful adaptation! Personally, I rushed to buy Katherine Applegate’s novel to immerse myself in history with my son and besides, I just saw that there is a sequel! Go for it to watch this movie if you haven’t already!