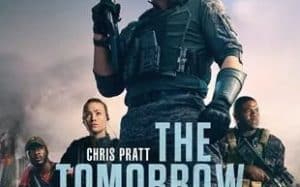 The world is stunned when a group of travelers arrive from the future – precisely the year 2051 – to deliver an urgent message: in 30 years, Humanity will lose a world-class war against a deadly alien species that has come destroy our civilization. The only way to survive this alien attack is to transport soldiers and civilians from the world of today thirty years later to fight this alien invasion. Among the rookies, Dan Forester, a family man and high school teacher, is determined to save the world for his daughter’s future. Dan teams up with a brilliant scientist and her father to rewrite the future of the planet.