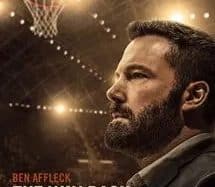 Jack Cunningham had it all. Undisputed basketball star in his high school, he had a clear future at university or even a pro, before turning away from the game and putting an end to his sports career. If the days of Jack’s glory and games are far away, he has never really forgotten them. A few years later, he was offered a chance to take control of his life by becoming the coach of the basketball team, in great difficulty, of his old high school. If he reluctantly accepts the position, surprised himself at this choice, Jack sees a last chance of salvation when the team is finally united and begins to win the matches one after the other.

Four years after their last collaboration, Gavin O’Connor and Ben Affleck meet for a film very different from “The Accountant”. When we look at the director’s filmography, we realize that with “The Way Back”, he leaves his comfort zone a little, because for several years, he had accustomed us to films of nervous action. It is not for the first time for him since he had started his career with this kind of film and he has even already directed a sports drama called “Miracle”. “The Way Back” is more than a sports film, it is a drama about the redemption of a man. The man in question is Jack, a person at the bottom of the hole who spends his time drinking even when he is working and who is going to be offered the position of basketball coach of his former high school team. The local hero is called to the rescue only, if he wants to save the team he will have to save himself first. If the story seems already seen, it is not surprising, because Hollywood particularly likes this kind of story. So yes, the story is cliché, but it works really well. One reason for this is Ben Affleck’s superb performance as Jack. A sober interpretation. It feels good to see him again in such an authentic role after what he has been able to do in recent years. Jack is a touching and endearing man who you learn to discover as you go, because you don’t know immediately why he is in this state. The dramatic part is moving while all the sports scenes are entertaining and intense. If I had to change something, it would be the order of certain scenes during the last part, but I think that would have made it even more cliché … In any case, “The Way Back” is a very beautiful drama and a real good movie.