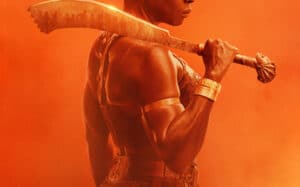 The Woman King traces the extraordinary story of the Agojié, a unit of warriors who protected the kingdom of Dahomey in the 19th century in West Africa. Their skill and fury have never been matched.

Based on true events, The Woman King follows the epic fate of General Nanisca, who trains a new generation of recruits and prepares them for battle against an enemy determined to destroy their way of life. There are causes worth fighting for…

The film “Woman King” was released with unfavorable reviews including a Zero pointing from friends of the World (sometimes I wonder why I read it every day since I was 17!).
So I went to make my own opinion and frankly it is far from uninteresting.
It already has the merit of introducing us to a part of African history which even romanticized contains a part of truth.
The Mino or amazons of Dahomey were a former all-female military regiment of the Kingdom of Dahomey (current Benin) which existed until the end of the 19th century. They were so nicknamed by Western settlers and historians because of their similarities to the mythical Amazons of ancient Anatolia.
Most Western critics being white, male and often from bourgeois strata, I fully understand that a film breathing female and African American Empowerment is not their cup of tea, but objectively I found the film honest in its production and execution.
I didn’t appreciate the bad African accents pronounced in American but there are so many Hollywood films that make this mistake (The films “House of Gucci” or “The Last Duel”).
Finally, I remember the Blaxploitation films designed for a black American audience who frequented the cinemas because the whites stayed in front of the TV but whose artistic level was sometimes limited and especially whose production escaped the community for which they were intended.
In today’s America, where the Afro-American elite (Oprah, Beyoncé, Will Smith) wants to shoot stories other than bandits and drug dealers, this film is recommendable and even positive for the young generation.