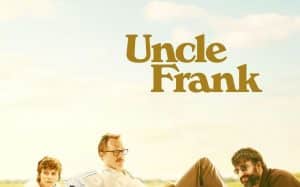 In 1973 Beth, still a teenager, left her native countryside to study at New York University where her uncle Frank, a renowned literature professor, taught. She quickly discovers that he is homosexual and that he has shared his long life with his partner Wally; a relationship he has always kept a secret. But the day Mac, the cranky patriarch of the family, suddenly passes away, Frank is forced to return to his family, along with Beth and Wally, to attend the funeral. During the journey, he must confront the ghosts of his past and look his family in the face once there.
Barely out of the session (with a silly smile on their lips and a packed heart), we came running to vote for Uncle Frank to win the Audience Prize at the Deauville Festival, and what a relief, what a joy, to discover during results that this delicious feel-good movie has won the award it deserves. Touching and funny at the same time, Uncle Frank recalls the beautiful experiences spent laughing and being moved in front of some excellent feel-good movies such as Little Miss Sunshine (the road-trip with characters either moving or barges, and often both) but which perfectly manages to make a place of itself without trying to copy or resemble anyone. We therefore follow a scenario which, on first reading of the Deauville catalog, clearly did not inspire confidence in us (“confronting the ghosts of the past and looking your family in the face”, we were already pulling out the rope to hang ourselves. .), but which, from the beginning of the film, rather gives us a great moment of tenderness and frank laughter. Not to trust Uncle Frank was to forget the man who directed him: Alan Ball, the American Beauty screenwriter and creator of the Six Feet Under and True Blood series for HBO. Director, screenwriter and producer of Uncle Frank, it’s hard not to see the talented paw infused into this incredible mix of pathos and lightness. The actors are great, starting with said Uncle Frank (a moving composition by Paul Bettany) who cleverly opposes the more whimsical character of Wally (brilliant Peter Macdissi) and which complements the low-key and realistic acting of Sophia Lillis (who will certainly be an actress to follow soon!). There is no shortage of hilarious situations (when Wally chases Frank in the car without any discretion, or when Wally comes out of the bathroom and finds himself compared to a turbaned character shown on television) and the final all in emotion – admittedly a little flower blue, so what? – shot a tender “Oooooh” to the whole room, a moment of sharing in the cinema of rare sincerity. The yellow filter that gives the colors of the setting sun, the retro music of the sixties, the messages of self-acceptance (for the young girl discovering her body, or for the condition of homosexuals still not tolerated in many countries), everything smells like the film which fills our eyes and fills our hearts. Intelligent and tender, Uncle Frank goes from laughter to emotion with rare ease.