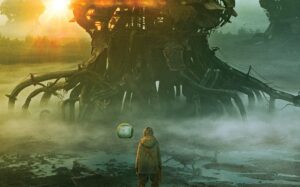 In the future, ecosystems have collapsed. Among the survivors, a few privileged people have taken refuge in citadels cut off from the world, while the others are trying to survive in a nature that has become hostile to man. Living in the woods with her father, the young Vesper dreams of having another future, thanks to her talents as a bio-hacker, highly precious in this world where nothing grows anymore. The day a ship from the citadels crashes with a mysterious passenger on board, she tells herself that fate is finally knocking at her door…

With Vesper Chronicles, Kristina Buozyte and Bruno Samper develop a universe in which genetics is a logical evolution of science: “This idea that the more technology advances and evolves, the more it will integrate with living things and become totally organic. Today we are starting to store digital information on DNA. The next revolution will undoubtedly be that of synthetic biology, it will Read more
Sources of inspiration
The influences of Vesper Chronicles are multiple. The directors have drawn on photographs of plants, insects, jellyfish and aquatic organisms, as well as the documentary series L’Aventure des Plantes by Jean-Marie Pelt and the animated film La Planète sauvage by René Laloux. . “We can also find references to Jim Henson, to Miyazaki, but also to designers like Neri Oxman, architects Read more
In natural settings
With the exception of the interiors of Vesper’s house filmed in the studio, everything else is in natural scenery. The team traveled across Lithuania during a snowy winter to do some scouting. Two weeks before filming, no filming location was confirmed due to snow. “We had to imagine what certain sets would look like when the snow had melted. Filming was also a real challenge.