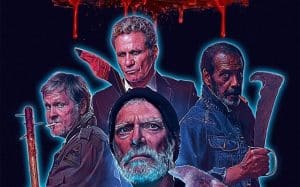 Fred, a Vietnam War veteran, and his military friends must protect a teenager and the headquarters of the VFW organization from a drug dealer and his army of mutant punks. For former soldiers, this battle promises to be the most difficult of their careers …

VFW had everything to make a very nice little B series but wallows very quickly because of a flagrant lack of rhythm but also of a poor quality photograph (too dark suddenly it is difficult to distinguish what is happening there ‘screen at times). From the start we feel the film that pays homage to John Carpenter to ape his music, VFW is inspired in particular by Assault (which is one of the best Big John films) with this time a bar of veterans ( hence the title of the film which means Veterans of Foreign Wars) attacked by a gang wanting to recover their drugs. The grandpas are not going to let it go, the first half hour consists of seeing them ramble on at the bar counter and where the rub is that this cast does not sweat charisma of course there is Stephen Lang and especially Fred Williamson (but the latter even if I adore him at 82) then the rest of the film is a bloody fight with hemoglobin spurting out in abundance. Unfortunately it does not work, as a big fan of the B series I really thought I would get off with such a film, I was the perfect guy as a spectator but it’s a cold shower.