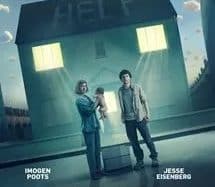 In search of their first home, a young couple visits with a mysterious real estate agent and finds themselves trapped in a strange housing estate …

A sci-fi film but above all a kind of psychological thriller, with a universe in camera well mastered and constructed. I really liked the purpose of the film, and the reading made of it, or in any case that I think to be transcribed. The fact that access to property is part of a social contract and of the absolute goal to be achieved in his family life, with the debt included to achieve this dream, surrounded by a denunciation of a certain uniformity of the suburbs suburban, everything is alike, without any personality. In the end, the film paints a portrait of a world abounded by consumerism and the capitalist system. The box with the sentence left by the promoter is clear “Raise this child and you will be free.”, While it is the opposite that the modern system requires, where raising a child takes time, energy, and a compulsory and vital participation in the consumer society … where the time allocated to the education of a child, does not have that given to rebellion or criticism of a system deeply rooted and appearing natural to everyone . The child represents this system. The effect of mimicry, duplication, anger as soon as we no longer take care of him … and his father, the promoter, would then represent the State which controls this system, and which seems inaccessible, sometimes invisible. A story that repeats itself year after year, head of state after head of state … a loop in the loop. The universe is therefore posed intelligently, and in the manner of an episode of The fourth dimension, through the prism of what society expects from us, it is in reality a demonstration of its absurdity. The interior design is well thought out, and extremely visual, inspired by the work “The Empire of Lights” by Magritte. And it is also the special effects that create the anxiety atmosphere. Originally it was 12 houses that were to be built in studio decor, but the budget not allowing it, they decided to build only 3, with 3 gardens and part of the road they take, the work then consisted in digitally duplicating in 3D and in 2D painting the various elements in order to create the environment of a real dead end development. The cast is very good and convincing, especially the promoter who inspires real anxiety just by seeing it. And the duo Jesse Eisenberg / Imogen Poots works very well! I still stay a bit on my end, there was material to find a more impactful and original outcome I think, because the end remains a little telephonic. I expected a conclusion that would lead to a myth and a broader and astonishing explanation. But it remains a very good first film, especially for the double reading of the subject!