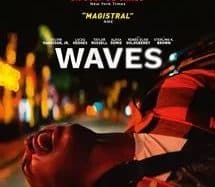 The journey of members of an African-American family, led by a protective but very demanding patriarch, on the troubled waters of unhappiness and mourning. A painful path that will eventually bring them together on the banks of love and forgiveness, if they manage to agree to let go.

We leave the projection with wet eyes. Submerged. By a rainbow of emotions. By a rainbow of reflections. By a rainbow of sensations. “Waves” is one of those films that you don’t necessarily expect but that leave a deep impression on you and touch you in the heart. These films that caress you like a soft summer light for a moment and freeze your blood after that. These films that we would like to keep just for ourselves as they are unique and special. These films which awaken an anthology of things in us, sometimes sleepy feelings. These films that touch the universal because they bring together everything that makes life beautiful, but sometimes horrible too. These films which captivate you from the first minutes and absorb your retina to never let go. “Waves” is all that and much more. Difficult to summarize when its history is of a simplicity which borders on asceticism. However, it fascinates us for more than two hours with its formal beauty and the intense emotions it provides. Besides, the feature opens on a ray of sunshine, symbol of the prism of the colors of the rainbow, and closes on substantially the same image. In the meantime, we will have crossed the whole prism of images and colors in our hearts, in our minds and to the delight of our eyes. Going through a whole range of emotions of all kinds. The filigree path and message are simple and beautiful. And by a clever trick of scenario, a reversal of very risky script which sees the film changing of main character in the course of way, “Waves” shows us that all that life can offer us beautiful things, it can take it back in an instant, that everything hangs by a thread. That happiness can be shattered at any time. But also that from the worst of misfortune can be born again happiness. This sublime feature film simply tells us about life in its most classic, in all its simplicity and complexity. It narratively follows a basic but intelligent emotional curve that smells of a note of positive intention since it brings us from the expression of the simplest happiness to a realistic nightmare to go back to the appeasement and the light found. The central trauma in the middle of the film is as powerful, realistic and grueling as, for example, those of “Requiem for a dream” or “Irreversible”. However much more down-to-earth, trivial you would say, and especially the sensational aspect less. While during the first twenty minutes, the director gives us a perfect and evanescent synthesis of American success, the drama that will gradually be knotted shows that in an instant everything can be shattered. But by the strength of his staging, his script and an unexpected change of point of view, he concludes his film with the most beautiful notes of hope. It’s beautiful to cry about and it’s difficult to contain your tears for several moments in front of the emotional charge of certain scenes where actors in all perfect points compete in truth in their acting and in accuracy to hug our hearts. Whether it is a sister who comes to the aid of a brother who is going badly, a severe and distraught father who decides to confide in his daughter or even a teenager who forgives his sick father, “Waves” intertwines destinies and heartbreaking moments without forcing the line but always touching us straight to the heart. It’s strong, it’s beautiful and it rings true. Beyond the deep emotions and reflections it provides, this work, both hard and soft, knocks us out by the beauty of its images. From the start when the camera swirls around its main character, chaining innocuous sequences to draw a portrait, we are captivated by the magnificence of its plans. It’s only Trey Edward Shults’s second feature film after the highly acclaimed and successful independent horror film “It comes at night”, already visually very relevant and impressive. He has managed here perhaps the most beautiful production of the year. Aesthetic without being pretentious or flashy, it therefore brings together the colors of the rainbow, from the darkest to the brightest depending on the tone of the scenes. The filmmaker also dares to narrow the screen in width or in length to stick with what is happening on the screen, in a discreet but convincing manner and in line with the subject. He has mastered ethereal sequences from Virgin Suicides or others so haunting that Terence Malick himself could envy them. While signing them with his personal touch, without singing anyone. He even manages to synthesize, what I say the big gap, between the imagery of the universe of the clip (helped by the fact that the film is located in Miami) and that of the typical American independent cinema. A beautiful work, a goldsmith’s work which contributes to the success