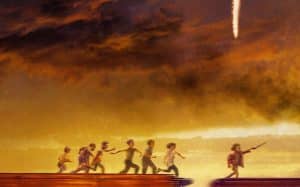 Lost on a mysterious island where age and time no longer have an effect, Wendy must fight to save her family, her freedom and keep the jovial spirit of her youth in the face of the mortal danger of growing up.

A revised and modernized version of the tale of Peter Pan. Among the positive points, we will retain the interpretation of the young actress embodying a bold and communicative main character, as well as natural sets which are worth a look. Level scenario we take, at the beginning, the main frame of the myth of the child who did not want to grow up (this one being of African origin in this adaptation). But it stops there, don’t expect to see characters flying among the clouds, or Indians, (real) pirates, fairies, mermaids and other fantasies from Never Land (apart from a few “volcanic effects”). Everything is centered on a sea creature (pictorial figure of the mother acting on the life of the island) that one barely distinguishes.
The second part has a sinister side, since we find ourselves with a population that has suddenly aged without knowing it, as if it were the price to pay for having let express feelings normally reserved for the greatest. Part connoting a reflection on the passage of time and the causes that can accelerate old age, arriving at the conclusion that ultimately adult life is worth living, despite the responsibilities and inconveniences that it implies. The main plot remains overall quite weak, even if the idea of ​​returning to the origins of the famous Captain Hook is relevant, in the end, not much is happening. In addition, there are other negative points: lack of variety in terms of shots, sometimes jerky production, rather bland photography, unmistakable and agreed music.
In short, it is a nice film but forgettable, to avoid showing to the youngest. Not only because we explicitly see a cutting of the hand with a machete, but also and above all because the intellectual dimension takes precedence over the imagination. We are far from the wonder of a “Hook” who also revisits the story of J. M. Barrie.