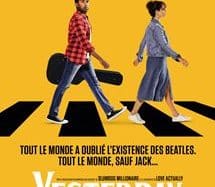 Yesterday everyone knew the Beatles, but today only Jack remembers their songs. He is about to become extremely famous.
Jack Malik is a struggling singer-songwriter whose dreams are sinking into the sea that surrounds the small village where he lives in England, despite encouragement from Ellie, his best childhood friend who does not never stopped believing in him. After an accident with a bus during a strange power outage, Jack wakes up in a world where he discovers that the Beatles never existed … which will put him in a serious case of conscience.