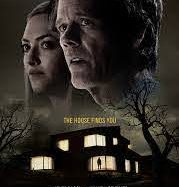 You Should Have Left

Almost 20 years after “Hypnosis”, David Koepp finds Kevin Bacon and reconnects with the genre that made him known. Theo, a man with a troubled past who is looked askance on every time he goes out in public, goes to a secluded house with his wife Susanna, a film actress, and their daughter Ella. Without feeling cramped in this huge house, the small family will quickly feel uncomfortable. Strange impressions, gloomy and violent nightmares, their stay will not be easy. Adapted from the eponymous novel by Daniel Kehlmann, “You Should Have Left” is a psychological thriller that puts the mental health of its characters to the test. Without frightening, even if there are distressing moments, the film is very mysterious and especially holds in suspense until the end. It’s hard not to think of another great film of its kind while watching this almost in camera. What is interesting and makes the story very intriguing is the double reading we can have of what is going on. The character of Theo is perfect for this and well developed. The setting, namely the house, which is an integral part of the story is well used even if we could have had something even more immersive. Overall, “You Should Have Left” is a good horror and psychological thriller which when at its best is particularly effective.